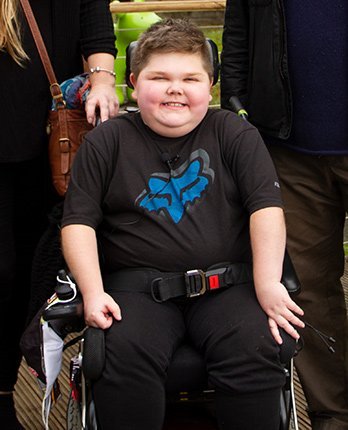 In July, we received the exciting news that Tŷ Hafan had been successful in its application to become a partner organisation to the Welsh Youth Parliament (WYP) – the UK’s first parliament ran for, and by, young people in Wales aged between 11-18.  After promoting the opportunity to all of the young people we work with and support, we encouraged them to tell us a bit about themselves, why they wanted to be a Welsh Youth Parliament Member, and what their ambitions were if they were elected.

In December, we were delighted to publicly announce 13-year-old Seth Burke as our Welsh Youth Parliament Member. Seth, a student at St. Cyres School in Penarth, has Duchenne Muscular Dystrophy (DMD) – a progressive condition which means his muscles do not grow as strong as other children without DMD. Seth cannot wait to get started in his new role, and has already spoken of his priorities as a Member, which focus around the environment, wheelchair accessibility and mental health in children and young people.

Keep an eye peeled this week for some great content, both on our social media channels and on the Welsh Youth Parliament’s Twitter @WelshYouthParli and Instagram @welshyouthparliament – you may spot Seth chatting to a familiar face…

The Welsh Youth Parliament will begin sitting later this month. We can’t wait to see Seth in action – and have no doubt that he will be a great advocate for himself, other children like him, as well as Wales’ two children’s hospices, Tŷ Hafan and Tŷ Gobaith in North Wales.

You can find out more about Seth by visiting our blog post on him here.

Keep up to date with all things Tŷ Hafan by following us on Twitter @tyhafan and on Instagram @ty_hafan.