The scan at 20 weeks picked up some issues, and weeks later, we learned that Alice had hydranencephaly. This means that parts of my daughter’s brain aren’t working properly, or simply didn’t develop in the first place. 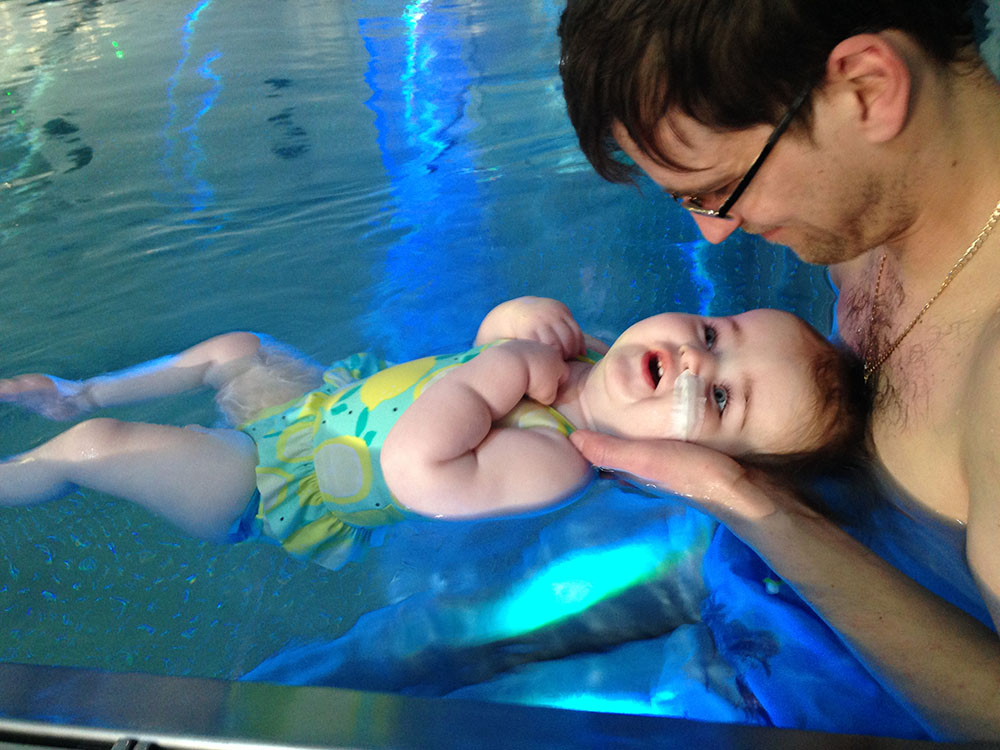 “Alice is our firstborn but midway through my pregnancy with her my husband, Ian, and I were told something wasn’t quite right,” says mum Hannah Hicks, from Cardiff.

“The scan at 20 weeks picked up some issues, and weeks later, we learned that Alice had hydranencephaly. This means that parts of my daughter’s brain aren’t working properly, or simply didn’t develop in the first place.

“I was just 28 at the time – it was such a shock for Ian and I and a lot for us to take in. Not at all what you expect when you are expecting your first child.

“When Alice was born on August 27, 2013 she immediately started having seizures and was rushed to Intensive Care. We were told she was going to die.

“Miraculously, she didn’t die. We were able to take her home.

“But the message in those early days and years and even now, that we continually hear from medics is ‘she might not, she might not.’

“So we have learned to live for every day and to appreciate the small things in life.

“Fast-forward to eight years later and here we all still are with Alice and her younger sister Sophia, 6, and little brother Jack who is two.

“Hydranencephaly means Alice has to use a wheelchair and isn’t able to walk, talk or feed herself. But that does not stop her, or us, from enjoying life.

“She can move all her limbs, but she doesn’t have any fine motor control so would struggle to pick something up. Having said that I saw her holding a knife when she was butter-icing a cake at school, so it’s not impossible for her.

“She has a standing frame and she has side supports to help her to sit up.

“Alice doesn’t talk like we do, using words, but she can communicate quite well with me. She makes noises which I have grown to understand – and she lets me know for definite when I have been talking for too long!

“She can also communicate with her eyes. If I ask her if she wants to watch the telly, she will look towards the telly. And so on.

“Alice is tube fed, but she does enjoy little tastes of food, especially sweet stuff like yoghurts and ice cream. She loves that!

“So now we plan as if Alice is not going anywhere. We plan for the best, every time. We try to do a little holiday every year. And when we’re at home we do try to do a lot. Alice loves to be out and about, so when the children are off school we try to keep busy.

“Tŷ Hafan has been there for us all the way.

“Pre-covid we were having respite breaks there twice a year. We all go. It’s more of a break and it really does make a difference. I get to have some time with Alice’s little sister Sophia. Ian and I have some time to chill. For once we don’t have to be continually thinking about meds, what have I got to do next.

“Alice especially likes to swim in the pool at Tŷ Hafan. It just seems to relax her. I guess it’s the only real time she has a sense of physical freedom – she’s not strapped in anywhere, she can just float.

“At Tŷ Hafan, there’s always someone if you want to know something. It’s a lifeline. The Mums and Dads groups are amazing too. Ian did the 5 and 55 fundraising walk with some other Tŷ Hafan dads in 2019. He’s a quiet man, and this gave him opportunity to chat in general about things. It’s nice for him to know that if he did ever want to talk – he knows there are people who would have gone through the same thing already.

“Then there are the Family Days at Tŷ Hafan. Such as Halloween. These are brilliant because I can take all the kids and there is stuff to occupy them all. Sophia goes to Super Sibs – she loves the outdoorsy stuff and the arts and crafts. As she gets older she is growing more aware that Alice can’t do what most other older sisters can do.

“Sophia is getting friendly with a couple of other girls around her age in Super Sibs. It’s really good for her to have friends in her life who are in a similar position to her. Her friends in school are great – but they wouldn’t have the same understanding.

“We also try to give back to Tŷ Hafan in our own way, as much as possible. Ian has a friend whose daughter was at Tŷ Hafan for end-of-life care. So now every year we put on a children’s Christmas party and fundraise for Tŷ Hafan. Santa from Tŷ Hafan comes along and it is a really big event for us with up to 70 children attending. We hold it in Ely Conservative Club and normally same people every year. It’s hectic, but I love it. All the children love going into see Santa – magically, the skittle alley gets turned into Santa’s grotto. Most people there know Alice and she absolutely loves it. It’s just a very nice vibe.

“I’m in a Facebook group with children with other parents with children with hydranencephaly. Some of the children have reached 18 and this makes me feel hopeful. You do see some children who don’t make it that far and it does hit you a little bit. So I focus on the ones who are doing well.

“Tŷ Hafan gives families so much support in so many different ways. Mums, Dads, siblings as well as the children themselves. You get to know the staff and they get invested with you. It’s all about relationships and community. It’s our absolute lifeline.”