Up until Rose was eight months old, life for the Jeans family was joyful. Then, their world was devastated. 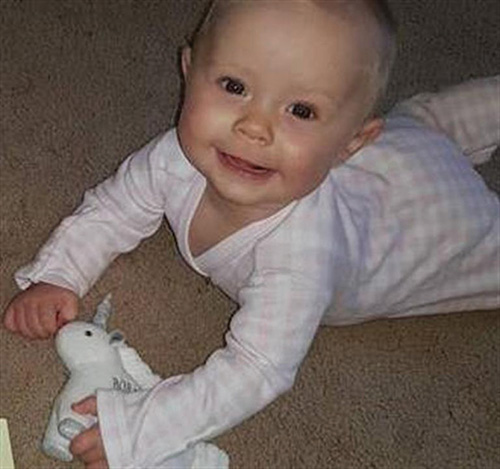 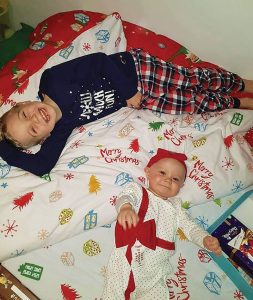 Andrew and Catherine Jeans lost their beloved daughter, Rose, to Atypical Teratoid Rhabdoid Tumour just days after her first birthday. This is their family’s story.

“Our daughter, Rose, was born on 11th February 2019. She was perfect and a much longed for baby sister for our son Oliver, who was seven at the time,” says Andrew.

“Rose was as good as gold with me. But as soon as Catherine came in the room, well, that was it! Rose didn’t want her dad anymore, mum was number one – she just wanted Catherine and, my goodness, wouldn’t she let you know it!”

“She was just gorgeous, the perfect baby. Rose was waving, trying to talk, crawling. She’d got two teeth and she was coming off milk lovely. At eight months, everything was fine,” Catherine remembers. 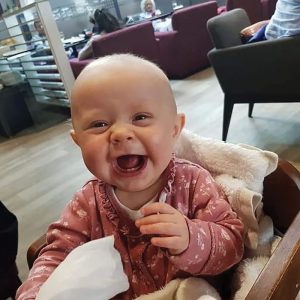 It wasn’t long until Andrew and Catherine noticed Rose’s bottom was blistered. The GP gave her some ointment and that eased her a little, but Rose was still experiencing discomfort and her condition worsened.

“In the November, we saw blood in Rose’s stools and her poo had become very loose all the time. Rose was admitted to Prince Charles Hospital in Merthyr Tŷdfil for a night where the suggestion was this might be dairy intolerance,” Catherine explains.

“So, we stopped buying any processed foods whatsoever for her. I made absolutely everything for her from scratch.

“Rose was okay over Christmas, and I thought we’d nailed it with the milk change. We had a lovely Christmas. But on New Year’s Eve 2019, things changed forever.”

Then came the screaming.

“It was terrifying and so, so confusing.”

Catherine explains the frightening day Rose’s health quickly declined: “My mother had Rose while Oliver and I were out. She rang me and said: ‘Come home please, something just isn’t right with Rose.’

“There was more blood in her nappy, and she was straining and absolutely screaming in pain. It was so awful.

“We went back to Prince Charles Hospital on New Year’s Eve 2019, and they witnessed for the first time Rose’s screaming. Straight away they started running tests.”

After an ultrasound examination at Prince Charles Hospital, Andrew and Catherine were told that medics had found something in Rose’s bowel which might have to be surgically removed.

“Rose was blue-lighted to Noah’s Ark Hospital in Cardiff, but by the time we got there, Rose stopped screaming. Confusingly, the doctors checked her over and discharged her,” recalls Andrew.

“We couldn’t believe it, so we phoned Prince Charles Hospital and went straight back there. After a bit of discussion, they told us to go home for the weekend and to bring Rose back on the Monday morning. So, that’s what we did.”

Awaiting the results of gastro tests, Rose started to refuse food and slept for longer and longer periods of time, only to wake up, fretting, scratching at a particular patch on her forehead and pulling her hair at the back of her head.

“I’ll never forget it. I was cwtching Rose when a consultant burst through the door and told us that they’d found seven or eight bleeds on Rose’s brain. It was terrifying and so, so confusing.”

An MRI scan showed that baby Rose had not only had bleeds on her brain, but she had a bleed on her spine, too. Just before her first birthday, Rose was diagnosed with Atypical Teratoid Rhabdoid Tumour (ATRT). 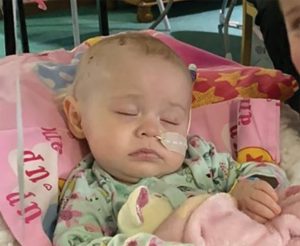 “It was the day after they started her on the steroids that a consultant told us it was cancer. Rose was still in the ICU, and we thought they were her last days. But we had hope with her being offered chemo – we thought the chemo would help.

“Two days later, the doctors told us that this type of cancer is one of the most invasive and that Rose was not strong enough for even one more dose of chemo. It had already gone too far. And we were told it was just a matter of weeks. I remember it so clearly.”

“It’s a home-from-home environment, where everyone matters.”

Despite complications, Andrew and Catherine were determined to move Rose to Tŷ Hafan for her final moments.

“Because Rose had a drain fitted to deal with the infection, she could not come to Tŷ Hafan. So, we had to make the decision to have the drain removed in order for her to come to the hospice, which we did.

“Rose was pumped full of antibiotics, we did a blessing in the conference room at Noah’s Ark, and then we were able to transfer Rose to Tŷ Hafan. 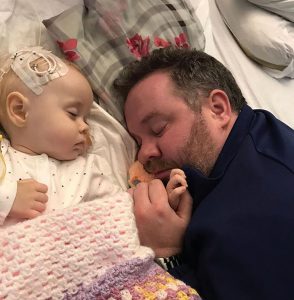 “We got to Tŷ Hafan on 10th February. Rose had her first – and only – birthday at the hospice and then we lost her.”

“If Tŷ Hafan wasn’t here, I just don’t know what we would have done. Tŷ Hafan enabled our family to be all around us while also providing us privacy. It’s a home-from-home environment, where everyone matters,” Catherine explains.

“We spent four days in the Tŷ Hafan hospice. It was priceless. Everything was done for us meaning we could just focus on being a family. Tŷ Hafan gives you normality at the most difficult of times. 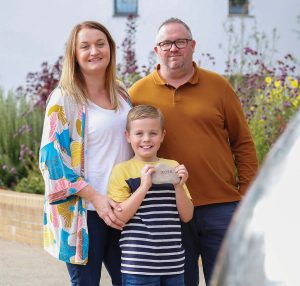 “Tŷ Hafan is a safety net. Just being in a room with other people who have lost children – there’s a sense of belonging. Nothing is ever forced upon you. It’s there if you need it. You can dip in and out whenever you feel ready. You are not forgotten, and you have their never-ending support.”